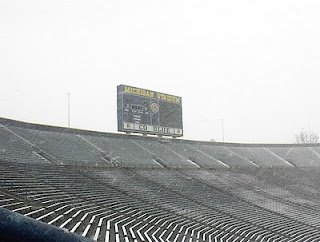 Today is the start of College Football Season!  Right now, Western Michigan @ Michigan State is on ESPN2, and later there's a chance we'll have UConn @ Michigan.  I'll be offline until later - except to like, you know, check email and stuff (during commercials, of course).

Have a great day.

(The above picture was taken by me in March of 2001 - when a friend and I snuck into the Big House to take pictures.  Go Blue!)

Update: Both Michigan and Michigan State won their games.  =oD
Posted by B.E. Sanderson at 11:12 AM