Hey All, and welcome to the Saturday Fishing Report.  Sorry I didn't post last week, but there really wasn't much to talk about.  Caught some bluegills a couple times and got skunked once.  Woohoo.

Anyway, here we are again.  I went fishing several times this past week with more of the same.  Even though the air temps are dropping the water is still too warm to accomplish much from the shore.

I have been trying lures and fake baits again.  Once this past week, I got what I thought was a bite, but since I didn't seal the deal, I can't be sure.  I do know that I scared the crap out of a big bass who was hanging out in a hole in the ledges.  He shot out of there so fast he didn't bother to take the under-ledge route and went over the top in about 8" of water.  Off into the deeper water.  Bummer.  I want to say he was about 18".  I guess he didn't appreciate the chartreuse worm I dangled in his hidey-hole.

Here's a picture I took of the spot June 2016 when the water level was about the same: 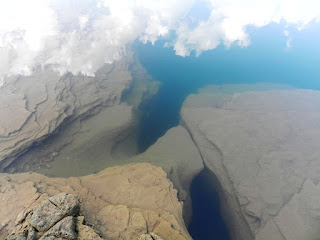 He was hiding in the lower hole and zoomed out over that rock.

Yesterday afternoon, I went out to the go-to spot in the afternoon.  It was gloriously cloudy when I left home, but in the ten minutes it took me to get to the spot, the sun had come out.  Which was okay.  It was still pretty good and the wind was making delicious waves upon the water.  I only caught two bluegills, but I had a good time.  An osprey carrying a 7-8" bluegill flew right over the top of me, which was cool.

A curious thing happened while I was out there that doesn't have anything to do with fishing but a great deal to do with using public lands.  As I was sitting on the ledges fishing, a couple arrived on their utility vehicle (heavy duty golf cart?).  They apologized for bothering me and then the gal tells me she's almost finished with her fire pit and the flat shelf rocks there are just perfect.  Then they proceed to load about a dozen large (12-24" diameter, 2-3" thick) rocks onto their vehicle and drive away, just as happy as clams.

Public lands are just that - public.  Which means they are for everyone.  Not a single individual's personal use.  Part of what makes these places so pretty are all the rocks.  And now, instead of everyone getting to enjoy those rocks, they're sitting in her backyard somewhere.  I wonder if she'll let me visit them, you know since they belong to me and everyone else who pays taxes and stuff.  People like that are as bad as the ones who leave trash all over the place, in my opinion.  Respect the land, people.  Leave it like you found it, unless you're doing something to improve it.  (Cleaning up after numbnuts, cutting deadfall out of the way, moving flood detritus, etc.)  And 'public' doesn't mean you can do anything you want with it.  Technically, that land belongs to the Army Corps of Engineers, and if they think people are misusing the area, they will close it down.  Which would be a shame and seriously piss me off.

'Nuff said.  Get out sometime this week, if you can, and enjoy the Fall.