Wish in One Hand is now available at Kobo. Oh, and it's only 99 cents from here until I decide to change it back.  Figure at least a month. Or until the end of the year.  We'll see how it goes.  I also sent it through to Nook and Apple, but I haven't got the notifications that it's there yet.

I finally saw a bald eagle!  We were on the way home from picking up Max's ashes and it few over the road between the house and the river.  I've since seen two more.  Yay.

The world has become such a ludicrous place I can't help but laugh at it.  It's a sad, sick, strange sort of laugh bordering on the hysterical, but still. Case in point - a woman sued for the right to wear a colander on her head in her drivers' license photo. Apparently, she's something called a Pastafarian.  She won because, hey, if you let one person bend the rules, you have to let them all bend the rules.

I read a big-long rant yesterday from an author, talking about how midlist authors were getting screwed by the big 5.  I was with her until she said something to the effect that only dinosaur erotica could be successful in self-publishing.  I think she might've had something in her tea.  Maybe she was on a roll and taking potshots at anything that moved.  I don't think Bella Andre would agree with her theory.  Bella's making big money self-publishing.  I certainly don't agree and I'm not making big money.  Yet.  This is year one.  Talk to me again in year three.

Jack's Pizza is the bomb. Especially the bacon-cheeseburger kind.  Even more so if you add extra toppings like pepperoni and olives.  Yum.  (BTW, it's also really inexpensive, which makes it even better to me.)

Crows apparently bury food.  We may remember the recent Vienna sausage incident.  And I might've mentioned the little stacks of corn underneath last year's leaves.  This year one made a hole in the driveway pea gravel and filled it with kernels.  Silly birds.  They also like to dunk the bread my neighbor puts out in the water pan we have for the deer.  One slice of bread, when wet, fits inside their beak quite nicely.

Speaking of deer, we think this is Elias from last year: 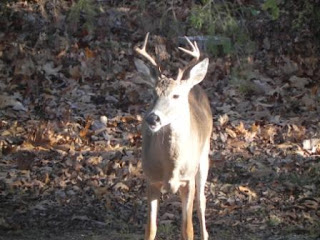 We also saw Jones last night, but the light was too low for any pics.

Labels: deer, opinion, this n that