I posted this to Facebook, but since I'm still totally geeking out, I'd thought I'd share here, too.  I just watched a redtail hawk eat a squirrel and I got pictures!

Here's him in the tree where I first saw him.  I didn't know then he was hunting. 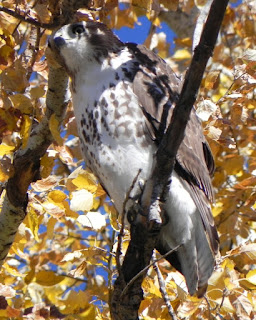 Then he took off and I thought I'd lost him (which is what usually happens), but he'd landed just across the street in a neighbor's yard.  It took me a second to realize why he'd landed on the ground.  But if you look, there's the squirrel laying in the grass to the right of him. 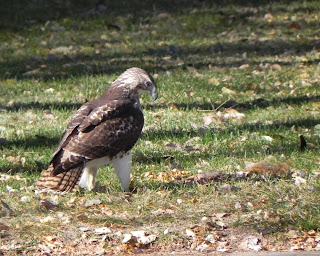 He snatched up his prey and took off for the park.  And I got lucky with this shot: 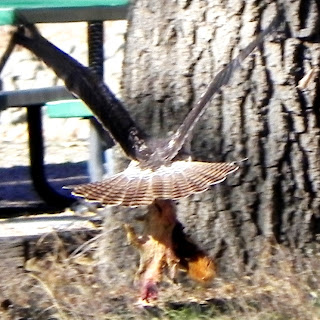 I never thought he'd stay where I could take more pictures, but I thought 'Doesn't hurt to try'.  I went back to the house and locked it up, then walked the block to the park.  Sure enough, he was sitting there, munching away. 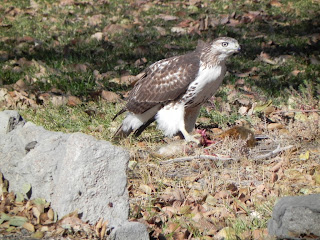 I snapped quite a few pics of him eating.  For me, it was the coolest thing ever.  I mean, this hawk has been hunting around the house for the past week or so, but I never dreamed I'd get such awesome action shots.  It felt like an episode of Wild Kingdom.

So, yeah, I'm totally geeking out.

Oh, and rest in peace Mr. Squirrel.  Sorry about being all happy and junk about your demise, but that's how the circle of life works.
Posted by B.E. Sanderson at 11:46 AM