As I said yesterday, I have this photography hobby.  I don't much care what I'm taking pictures of.  Anything that catches my eye, really.

When I was a kid with that first old 110 camera, I took pictures of clouds.  I'd lay on the grass, snapping pictures upward of any cloud I thought was interesting.  I still have some of those shots.  They're pretty boring.  (Clouds, btw, make poor subject matter unless you have something in the foreground.)

When the old 110 died, I went for years not taking pics of anything.  Of course, I was also in college and didn't really have the time for hobbies.  Looking through the old albums, I really wish I'd saved up enough money to buy a new camera.  There are memories I wish I'd saved.

My next camera wasn't purchased until I was pregnant.  It was a cheap-ass 25mm, but it worked for all the shots I wanted of my bundle of joy.  (Okay, bundle of squalling, pooping, vomiting - most days.)  I took tons of pics.  K.D. laying in her bouncy chair.  K.D. screaming.  Plenty of shots of her sleeping.  During those days, it wasn't so much about the art of a shot, but capturing memories.  Her first steps.  Her first birthday.  Those important first holidays.

It was probably long about 2000 when I snagged a sweet job working as a web designer / trainer / consultant.  Along with that came the need for a digital camera.  Can't design a good company site without a few pics of the offices, the facilities and the employees.  That damn HP cost me almost $500.  And some of my best work came off that old thing.  (Unfortunately, my best work is also low res and when I try to blow it up to frame, the quality blows.  With that thing, it was either low res or be satisfied with like 10 pics before I had to download.)

I had that camera for a good long time.  It went with me through Arches, Yellowstone and Dinosaur National Park.  It catalogued the journey from Florida to Utah.  It still works as far as I know.  I just can't get the cable to plug into the port anymore so I can't download anything.

Enter HP #2.  The little camera that could.  I bought it and I hated it (but since I got it half-off on clearance, I couldn't return it.)  It didn't have the little view window.  Everything I took I had to look at on the little screen.  Have you ever tried to take a pic using that damn screen when it's a bright, sunny day?  Holy crap.  Still, I got used to it and eventually took some killer shots.  But it wasn't enough. 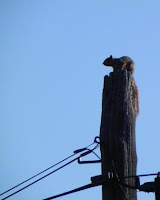 Last year, my darling husband got me a Nikon for my 40th b-day.  He da man.  The zoom alone on this thing is worth every penny.  All those years I spent trying to get that critter way the hell over in those trees?  Now I can get right up on the damn thing without having to worry about scaring the bugger away.  Hell, I even used it to do my daughter's senior pictures.  Pay a professional?  Oh hell no.  Not when I got this baby.  Woohoo.

So now, it's a year and then some later.  I have the camera.  I've mostly learned how to use it.  (Manual?  We don't need no stinkin' manual.)  Now I can finally go back to taking the artsy shots again.  The clouds, if you will, but with the knowledge to make those shots turn out right.  And with the present my husband gave me this x-mas of new memory chips, I can actually take more than 19 pics before I have to download.  (You don't want to know the acrobatics we had to do when we went to Estes Park.  All I can say is thank the gods for Daughter's laptop.)

Now, I can stand outside with the flock of robins who arrived yesterday and get stuff like this: 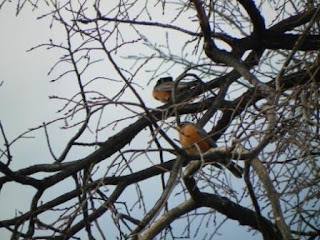 Someday I'd like to be good enough with this thing that people will actually pay me for my pics.  Who knows?  Stranger things have happened.  Until then, though, this is a lovely way to take a break from writing.

And yeah, that first pic up there is me at the ripe old age of 14 when we spent a week in the Les Cheneaux Islands.  The fish?  Mostly my dad's handiwork, but my sister and I caught a couple.
Posted by B.E. Sanderson at 9:02 AM