Yesterday, I was feeling pretty good - despite having a scratchy throat the day before (ugh, allergies) - so I went out into the world.  The first place I typically stop is the gas station for a beverage.  So, I snag a Dew and head for the cash register, contemplating whether to buy lottery tickets.  The gal at the register, who sees me about once a week, took one look at me and said something about how angry I looked.  "What's wrong?  You usually look happy when you come in here."  I laughed.  Then I told her I have what is known as 'resting bitch face'.  We laughed together and I bought two lottery tickets to go with my Dew.  (Didn't win, btw.)

A little while later after my needs were met at Wally-world, I took the leap and stopped by the local indie bookstore.  I've been wanting to stop and meaning to stop and absolutely terrified to stop for a while now.  Cuz walking into a bookstore to chat about my book scares the crap out of me.  And I told the bookstore gal that after we'd gotten to talking.  She's a really cool person.  We chatted books and authors and my work and her work.  I gave her a copy of Dying Embers and some swag to go with it.  She gave me the names of some local writerly people who might help with getting my work out there.  Then I bought some books I've been wanting - chiefly, the first three books in the Dragonlance series :happy sigh:, as well as a couple books by Sarah A. Hoyt, and the next book in the Kris Longknife series by Mike Shepherd.  Sadly, she was out of Silence of the Lambs.

In other news, this past week saw the maiden voyage of both Hubs' fishing boat and my newsletter.  We had fun on the boat and subscribers had fun with the newsletter.  It's all good.

Except Hubs and I now have the fishing bug.  Last night after dinner, we were chatting and then decided to throw the rods in the car and drive to a local spot.  We didn't catch anything, but it was lovely out, and it gave me a chance to practice casting.  I suck at that.  My reel is now a gnarly mass of knots.  It was a blast.  And we got to see the moonrise over the river.  Then we came home. 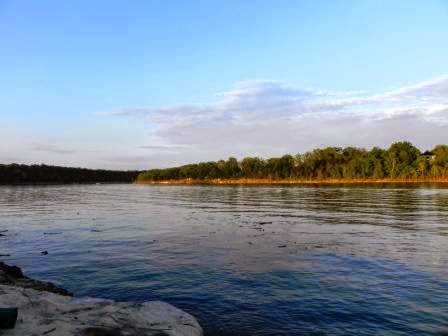 Things are ramping up for the release of Accidental Death, and to that end, I decided to lower the price of Dying Embers to .99 for the month of May.  I love May.  It's my favorite month.  So, my love of May and my excitement over the publication of my second book means readers win.  Spread the word.  (I mean, once Amazon actually updates the book's listing with the 99 cent price.)

And since Accidental Death is releasing soon, I'm moving ahead with some marketing.  I'll be on Omnimystery News this coming Friday with my cover reveal and a week later with a book excerpt.  Plus, I designed up some postcards and bookmarks for the release.  Yay!

The gal at the local bookstore thinks I need to go to a regional book event coming up in a few weeks.  I think she's probably right, but... :shudder:  It's hard to even think about putting myself out there with other writers - IN PERSON - especially after all those years of not telling most people in real life that I write books.  I'm thinking about it, though.  I mean, Tess Gerritsen's going to be there.  That alone terrifies the hell out of me... err... makes me interested in going.

Anyway, that's all I can think of write now.  I hope you all had awesome weeks last week and that this coming week is amazing for all of you.