I'm a total toad today.  I spent yesterday entering the final tweaks to Accidental Death and then loading it for pre-order at Amazon.  And now I'm spent.  But I still have a ton of things to do, so I better get off my ass and get to work.

I don't want to talk about Accidental Death today, but my brain is filled up with it.  Let's see if some trivial stuff helps...

Did you know earthworms are hermaphroditic?  Two worms mate and they both crawl away pregnant.  (At least that's what I remember learning.  I'm too scattered to go look it up this morning.)

Speaking of mating, male three-toed box turtles have a concave shell underneath so they don't fall off during mating.  That's how I knew this one was a girl - flat under shell.  (Plus, her head isn't brightly striped with red and orange.) 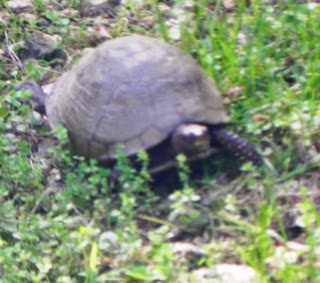 Sorry it's blurry, but I took this one out the window from the sun porch.  When I went outside to get a better picture, she closed up until after I left. 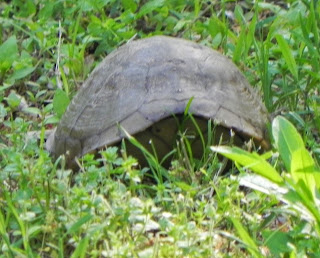 The other day when I was coming home from the store, I rounded a corner near the house and there was a roadrunner standing in the middle of the road.  I slowed down and waited.  He turned and started running away from the car - right down the middle of the road.  So there I was slowly rolling behind this bird until he decided to turn left and hop across the ditch.  Rural world problems.  LOL

I'm still trying to get pics of the roadrunners around here, but they're elusive buggers.

Speaking of rural, do you get commercials for FarmersOnly.com where you're at?  It's a dating website for farmers and the people who want to love them.  Their theme song gets stuck in my head.  "You don't have to be lonely... at FarmersOnly.com."

And on that note, I'll turn it over to you.  What this n that do you have in your world?  Tell me something that'll take my mind off this book launch.

Labels: nature, this n that