The News (Or the Final Point)

Do any of you remember a post I dropped back near the beginning of the year?  I mentioned a big change and made a couple points out of it.  Well, I've been keeping this last point to myself since January.  It was a necessity.  I live in a tiny town filled with gossip-mongers and we really aren't interested in adding to that.  (Lord knows enough speculation has been filling this place anyway, but I didn't add to it.)

What the hell am I talking about already?

Today is my husband's last day of work.  He's been managing this city for the past 11 years and he can finally be a private citizen again.  YAY!

Not until recently.  Not for sure until last night actually when we hammered out the last wrinkles in the house we've made an offer on.  But now we're sure.

We close on this lovely house in Missouri next Friday. 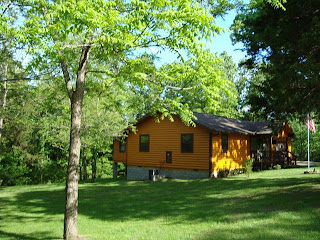 We're hoping to be moved by the second week in April.

For internet security purposes (and my own paranoid privacy issues), I'm not telling exactly where in Missouri, but suffice it to say it's close to lakes and rivers and most importantly - TREES.  Living in scrubby, flat Colorado has damn near sucked the life out of this Michigander.  (And moving back to Michigan was out because it's too freakin' cold.)

I'll be up to my ass in alligators until after we get settled, but it'll be worth it.  Just bear with me.  And since I use gmail, my email address will not be changing - just the speed with which I'll be replying to some things.

Needless to say, I'm excited.  And a little freaked out because hey, we're moving hundreds of miles.  (Not that I haven't done that several times in my life already, but it's always a little freaky-making.)

Keep your fingers crossed everything goes well.  ;o)
Posted by B.E. Sanderson at 8:44 AM