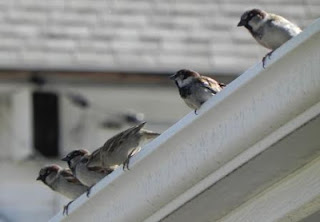 As I was writing a comment on another blog recently :waves at Jeffe Kennedy and the other Word Whores:, I began to think about how I've come to know the authors I love now.  Way back when, I would find new authors by browsing through the bookstores or at the library.  And it was pretty much that way until I became an author myself and started to look for other writer to connect with.

I remember early on, I stumbled across Karin Tabke's blog.  And from there I was introduced to Murder She Writes gals Allison Brennan, and Jennifer Lyon, and later Roxanne St. Claire (or maybe I found Roxanne through another of my early blog friends - Kristen Painter).  I know somehow or other, I followed one of those awesome gals over to a romance blog (I forget which - it's now defunct) where I found Monica McCarty.

Not only have I found awesome authors this way, but I've found new friends and critique partners.  Through Monica McCarty, I found my friend, Natalie Murphy :waves:.  Through MSW (or through Jen Lyon's blog - I forget), I found Silver James and through Silver, I found Janet.  :waves at both of them, too:

The web is such a great way to find new authors to read.  It's also an awesome way to meet people (even it's not face to face), make friends, and find people to read your work.

Who have you met online?  How many degrees of separation can you trace?  (Now that I think about it, we're probably all within six degrees of Nora Roberts.  For whatever that's worth.)
Posted by B.E. Sanderson at 9:21 AM