In a few short days, November will be here, and you know what that means?  National Novel Writing Month!  Or as it's more affectionately know, NaNoWriMo - Nano for short.  Because of this, all sorts of things will be hopping in the writing world.  Thousands (hundreds of?) will be pounding away at their keyboards in hopes of hitting the goal of writing a 50K word novel in thirty days.  Others, like me, will be using this month to hunker down and get at least that many words down on the novel they've already got going.

Personally, I've never even been to the NaNoWriMo site, or participated in any of the actual festivities planned for this month-long event.  I just toddle on my merry way, using this month to inspire me to greater heights and larger word counts.  In 2008, I whipped out a large portion of RTL during November.  In 2007, I wrote the majority of Blink.  If memory serves, I worked on AWJ during Nano in 2006.  Everything before that is a blur.

Anyway, this seems to be an appropriate month to get our collective writing buns in gear - as flat or as wide as they may be.  So... I'm pledging to write 50K words next month.  (Which means I'm going to have to get off the paper and onto the keyboard, but that's life.) 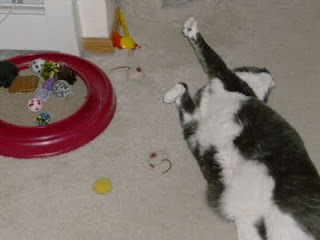