Okay, so I'm a bird nerd.  I love watching birds, looking for birds, adding new species to my life list.  (Oddly, don't like parrots - but that's a story for another day.)  A week or two ago, I was driving past a nearby lake and saw a big bird I didn't recognize.  I mean, I thought it was a cormorant, but there are several species and I couldn't be sure.  So I sped home to grab my camera.  Sure enough, the feathery bugger was nowhere to be found when I got back.  Here and there since, I've been taking the camera over to the locale to try and catch said feathery bugger.  No luck.  I caught part of him flying away once, but other than that, nada. 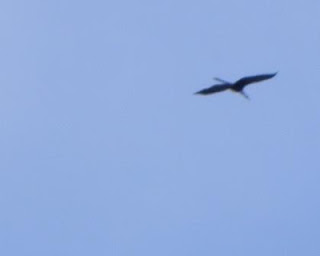 This morning I was in a particularly foul mood (no pun intended), and since I couldn't get ahold of my mom to vent it out, I grabbed the camera.  I got some really nice flower shots and a few good duck shots, but the cormorant was nowhere to be seen.  Shrugging it off, I got ready to go to my other favorite place to bird.  If the cormorant wasn't going to show, I could probably catch an American Avocet or some other nifty bird. 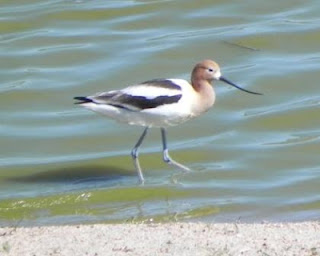 As I got close to my car, I saw movement out of the corner of my eye.  Something big was landing.  Probably just a Canada Goose or some such common bird. 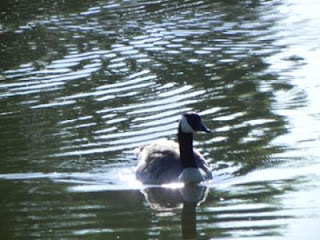 Lo and behold, it was the elusive frickin' cormorant.  And of course, it was in the middle of the lake, with the sun at an odd angle for taking pics.  So I walked around the lake and used my zoom to get some middlin' shots.  Several times when I went to take the pic, the damn bird dove under the water.   I took as good a shots as I could and then headed for the car.  At this point, the cormorant took off.  He circled the lake and my head several times, flying just fast enough to make it really hard to get a pic.

Finally, he took pity on me.  He landed in a tree.  On the opposite side of the lake from where I was standing - he couldn't make it easy for me - but he stayed in that tree until I got right up underneath him.  And took this: 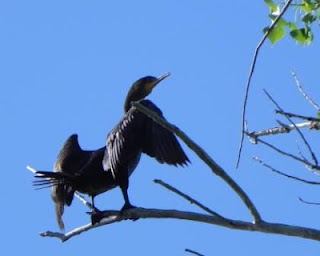 Pretty damn cool, huh?  I left there feeling pretty good about life in general.  Went over to my other birding spot and got a shot of four little Phalaropes getting chased off by a bully Avocet.  Good birding day.  It sure changed my crappy mood, let me tell you.

And it served as a reminder.  Patience pays off.

Which reminds me.  If you haven't entered last Thursday's contest, head on over there.  I mean, I'd love for one of the people who have already entered to win, but the more the merrier.  You have until this coming Thursday (5/10) to comment.  Still haven't decided on a prize, but I've got some ideas.  Swag acquired.  Whoever wins is gonna love it.  So enter while you still can.  ;o)
Posted by B.E. Sanderson at 7:52 PM