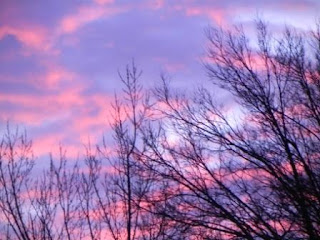 Last night after 80849 words, I finished Djinn 2.  I still don't have a name for it, but the first draft is in the can.  (And hopefully when I go back to edit, I won't want it in the trashcan.)

I said that I would finish it in January and indeed I did.  I started this December 1st.  I wrote the end of it January 31st.  I guess that means it's time for a new goal, eh?

I want to have the edits finished on Djinnocide by February 29th.  I also want to have the submission materials all rewritten by then because I'd really like to start querying in March.  But I'm thinking that might be a little far-reaching, so if I don't hit the query waves until April, I'm okay with that.  I'll just take it one day at a time.

And btw, the pic up there is a totally unretouched photo of the sunrise a few days ago.  Neat, huh?  It doesn't quite look real, does it?

How are your 2012 goals looking after the first month?
Posted by B.E. Sanderson at 7:46 AM